As I write this, we are already a fortnight in of this new year, which, in esoteric numerology equates to not only a “2” year, but a Master year of “11/2”.

“2” is the number of cooperation, sensitivity towards others, association and balance.  Master numbers relate to an additional potency in energy allowing for a higher achievement of the base number, which is considered to be achieved only through the action of higher service, ie for the benefit of mankind.  With this  in mind, “11” relates to the power of “1” but on a higher vibrational (or spiritual) level, ie, inspiration, illumination, and revelation.

2018 is described as the year to be “patiently open to receive”, where, according to the Astrology Club, opportunities will present themselves to us where we will be “invited to work with our passion and sense of belonging particularly as these qualities spring from our urge to create”.  Throughout the coming year we will be shown the way in which we are to channel this energy, at all times, however, we need to keep in mind to utilise these openings in ways that will enable us to actually contribute to the better world that we yearn to see. 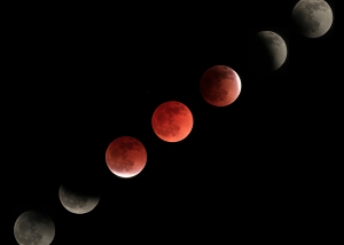 is is also a year of many moons with there being not one but two months that contain two moons – January and March, with February not containing a moon at all.

When a month contain two moons, the second is often referred to as a “blue moon”.  While the term “blue moon” has been around for over 400 years, according to Philip Hiscock, its calendrical meaning has only become widespread in the last 25 years or so.

Local astronomy lecturer, Paul Curnow, from the University of Adelaide Planetarium, also advises that this January blue moon will also coincide with a total eclipse of the moon (visible from Australia where the maximum eclipse will be reached just before midnight at 11:59:51 pm, South Australian time), as well as a Supermoon (moon at perigee).

The last time a lunar eclipse coincided with both a Supermoon and blue moon was in 1866, some 151 years ago – and the next one won’t occur until 2028.

Paul Curnow advises that a lunar eclipse is totally safe to watch naked eye as it is caused when the moon moves into the earth’s shadow.  This results in some sunlight being refracted (bent) in the red part of the spectrum and will make the moon appear an orange colour to a blood red depending on atmospheric dust at the time.  Australia is particularly well placed for what should be a visually stunning eclipse.

The Kaurna People of the Adelaide Plains call the moon ‘Kakirra’, and when it is full it is called ‘Kakirramunto’.  Blood moons were often seen as portents of doom to many ancient cultures, before scientists were able to explain what was happening.  All we need now are clear skies.

So if you are not doing anything on the evening of Wednesday, 31 January 2018, maybe a little moon gazing could be appropriate. If you are Adelaide, you are most welcome to join at Grange Beach for our open to the public Yemaya Blessing of the Waters event.  More information about this event can be found here.

Many thanks to Paul Curnow (Astronomy Lecturer, Adelaide Planetarium, UniSA) for the above information.

With the easing of COVID-19 restrictions on gatherings, events are becoming available however with strictly limited numbers in place.

Bookings are essential for all events.

:: Gathering Around the Cauldron: Limited number of attendees are able to attend these meetings now where we will explore some of the practices and philosophies of magic, ritual and contemporary witchcraft.
Date: Thursday, 6 August.
Theme: Magick of the Elements.
More details call can be found at “Training Available”.

:: Imbolc – The Celtic Festival of Spring: Spend the day celebrating the first stirrings of spring through making your own Crios Brigite, candle magick and exploring Brigid’s transition from Goddess to Saint.
Date: Saturday, 1 August 2020.
Venue: Riverdell Spiritual Centre.
Limited number of vacancies.
See “South of the Equator” for more information.

:: A Day with Hekate: Spend the day exploring this powerful goddess who associated with the crossroads, the Underworld, the moon and witches.
Date: Saturday, 13 August 2020.
Venue: Riverdell Spiritual Centre.
Limited number of vacancies.
See “Eventbrite” for tickets.

:: Spells, Amulets and Talismans: Step into the realm of practical magick for this day of self empowerment through the practical exploration of spell crafting and the use of amulets and talismans.
Date: Saturday, 3 October 2020. Limited number of vacancies.
See “Practical Crafting for more information.

Witchcraft South of the Equator

Call of the God Anthology